About Death and Life
Rabbi Shmuel Rabinowitz, Rabbi of the Western Wall and Holy Sites

The name of this week?s parasha is one of the most beautiful in the Torah ? Chayei Sara (The Life of Sara). But when we start looking at the parasha we see that it deals with death much more than it deals with life. Already as the parasha begins we read about Sara?s death and burial, and at the end of the parasha we read of Avraham?s death and burial.
Is the parasha?s name ? Chayei Sara ? nothing more than irony? Doubtful. Avraham and Sara?s death are described in the Torah and in the midrash as events that could illuminate life. The midrash states that Sara?s years were equal in goodness:
A hundred as twenty ? for beauty; twenty as seven ? for sin.
(Yalkut Shimoni)
About Avraham, the Torah states:
And Abraham expired and died in a good old age, old and satisfied.
(Breishit 25, 8) 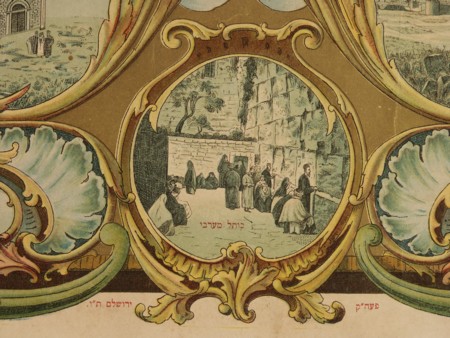 Avraham and Sara?s deaths are not seen as tragic but rather as the successful conclusion of full lives, lived correctly, and which left their mark on humanity to this very day.
The finality and inescapability of death can influence people?s lives in different ways. There are those who see death as a mockery of life. Man tries to act and have an impact in his life, but at the end of the day he dies, disappears from memory, as do his deeds. There are those who see death as an impetus, a drive to accomplish more, to influence and fix things in the short time we have to live.
Avraham and Sara are the perfect role models of people for whom death did not deter them from life. The lives they led were so full that even when death came, and it came to them as it would to anyone, it did not make their lives devoid of significance.
On the other hand, Esav, the grandson of Avraham and Sara, was asked by his younger brother Yaakov to sell him his firstborn rights. His response is quoted in the Torah:
“Behold, I am going to die; so why do I need this birthright?”
(Ibid, Ibid, 32)
The sages of the midrash, in relating to Esav?s words, quoted the verse ?Weep not for the dead, neither bemoan him: weep for him who goes away? (Yirmiyahu 22, 10) and used that as a comparison between Avraham and his grandson Esav:
Weep not for the dead ? this is Avraham; weep for him who goes away ? this is Esav.
(Breishit Raba 63,11)
According to Jewish tradition, on the same day that Esav said ?I am going to die?, Avraham?s funeral was taking place. The sages of the midrash said about this: ?Weep not for the dead ? this is Avraham?. Do not cry for Avraham who died, because his life was rich in content and deed. Death was not a threat to him and did not detract from his life?s significance. ?Weep for him who goes away ? this is Esav?. Who should we cry over? Esav, whose entire life was moving toward death and he was ?going to die? for many years before he reached his finish line.
These two perspectives on death and on life are not fate. Man has the ability to choose how to live his life ? like Avraham who lived a full and rich life and died ?satisfied?, or as Esav whose life was not lived, but was painted by the dreary hues of the shadow of death.