What are we happy about?
Rabbi Shmuel Rabinowitz, Rabbi of the Western Wall and Holy Sites

Simchat Torah is the last holiday in the string of Tishrei festivals that begins with Rosh Hashana, continues to Yom Kippur and Succot, and ends with Shmini Atzeret following Succot. Outside of Israel, Shmini Atzeret is followed by Simchat Torah, while in Israel they are on the same day. Whate celebrating? Every Shabbat, we read a parasha from the Torah, and on this day, we complete all five books of the Torah. We celebrate this completion with a huge celebration, with singing and dancing. The interesting timing of Simchat Torah begs the question: Why was it arranged so that completing the reading of the Torah comes out at the end of the series of Tishrei holidays? Is this a coincidence? 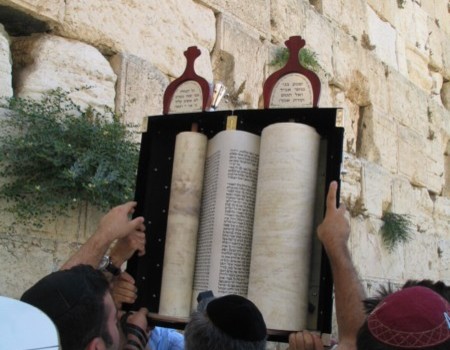 To answer this, we must get to the root of the connection between Am Yisrael and the Torah. There are those who see the Torah as a book of directions and life guidelines. According to this outlook, the Torah is a way for us to know how to act in the world ? what is permissible and what is forbidden; what is the moral path by which we should navigate our lives. This is undoubtedly true, but whoever looks at the Torah with this perspective alone misses the main point regarding the connection between Am Yisrael and the Torah.
The truth is, the Torah is the closest thing to G-d that we know. It is an amazing essence of the Creator?s wisdom and ways. When we learn Torah with the knowledge that it is a gift from G-d, we bring ourselves closer to Him and to His wisdom. To be clear ? learning Torah is not a means for getting closer to G-d. Learning itself is getting closer to G-d. Because the closest thing to the Creator that can conceivably be reached is the Torah.
To delve deeper into this idea, it is important to know what the great thinker and rabbinical authority, the Rambam (Maimonides), said about the wisdom of G-d. According to him, many people are mistaken and imagine the Creator ? like people they know ? as an entity that has life and wisdom and knowledge. But the truth is that that is not the case. He Himself, His knowledge and His wisdom are one and the same. His personality cannot be analyzed as segments. Based on this, and since the Torah represents for us the Creator?s wisdom and moral compass, when it is learned and when we walk in its path, we get closer and closer to G-d?s wisdom and goodness, which are G-d Himself.
In the past, Am Yisrael had other ways of getting close to G-d. There were prophets who conveyed His word to the nation or to individuals, as needed. There was also a Temple and the worship that took place there. On Yom Kippur, for example, the High Priest had special and sacred jobs in the Temple accompanied by the prayer and blessings of masses of Jews who were present. At the peak of these jobs he would enter to burn incense in the Holy of Holies, the sacred site of the Tablets of the Covenant containing the Ten Commandments. Our sages say that on this day, a red piece of yarn would be tied to the entrance of the Temple and at a certain point of the Yom Kippur service, it would miraculously turn white, as in the verse: If your sins prove to be like crimson, they will become white as snow. Obviously, the entire event brought about immense closeness between Bnei Yisrael and their Father in Heaven.
Sadly, after prophecy ceased and the Temple was destroyed, there was no possibility of getting so powerfully close to the Creator other than ? learning His Torah and letting it illuminate our path throughout our lives.
The period of the holidays is a wonderful time to get closer to G-d. At the beginning we pray to Him during the days of mercy and penitential prayers peaking at Rosh Hashana and Yom Kippur. Then we take pleasure in His shadow during Succot when we try to recreate our forefathers? booths as they wandered in the desert after the Exodus from Egypt. These succot, these booths, represent G-d?s tremendous spiritual and material embrace during this time.
How nice and appropriate to end this period with the joy of completing the Torah! All this magnificent closeness to the Creator reaches its peak with the great celebration of the strong connection we have with G-d: His holy Torah!
There is no better time to celebrate the end of the annual cycle of completion and beginning of the five books of the Torah than at the end of this unique month. The celebration is not merely a completion and beginning anew, but a mark of the incredible power of the eternal and inseparable triangle: G-d, the Torah, and Am Yisrael.