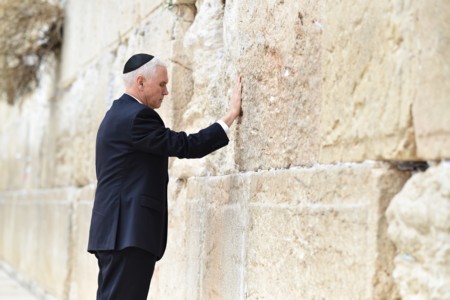 After this, the Vice President prayed with Rabbi Rabinowitz near the Western Wall stones and placed a note between the stones.

One hundred and forty-seven years before you, President Lincolns Secretary of State William Seward visited this exact place. Sewards most moving description is that of his visit on the eve of the Sabbath to the Western Wall. Mr. Vice President, 147 years ago, the Western Wall Plaza was only a narrow and neglected alley. Very different from the plaza you see here today. But Seward tells of a place to which all the Jews of Jerusalem stream. Of lofty prayer, full of pain and yearning, the type of which is rarely seen.
This is what the United States Secretary of State wrote 147 years ago, tying the first knot in the deep connection between the United States of America and Jerusalem. Lately, Mr. Vice President, we have been privileged to see the fruits of this deep connection, when President Trump recognized what he himself said should be obvious: Jerusalem is the eternal capital of Israel. Always and forever.
Mr. Vice President, here, right above us, on the Temple Mount, King Solomon built the Temple. It was an extraordinary building. Its windows were made so that instead of bringing light from the outside in, it radiated light from the inside out. The light we wish to bring to the world, Mr. Vice President, does not come from outside, it comes from within. This is the secret that the ancient Jewish nation has known throughout its long and ancient history. And this is the secret upon which the great nation of the United States lives since it was established as a free country.
The light of Jerusalem is the light of love, the light of concern for the welfare of the world, the light of peace. Jerusalem is named for peace. In the Temple, prayers were recited for peace among all the nations of the world. For two thousand years, Jerusalem was passed from one hand to another. Now that it has returned to its children, all nations can again pray here, and members of all faiths can come to the Western Wall to pray and fulfill anew the ancient prophecy for My house shall be called a house of prayer for all nations.
The deep connection to the land of the Bible and the commitment to the words of the prophets are the wellsprings of our strength. In the name of the Jewish nation, I thank you and President Trump for the courage to bring light to the world in the face of darkness.