New Signs at the Western Wall 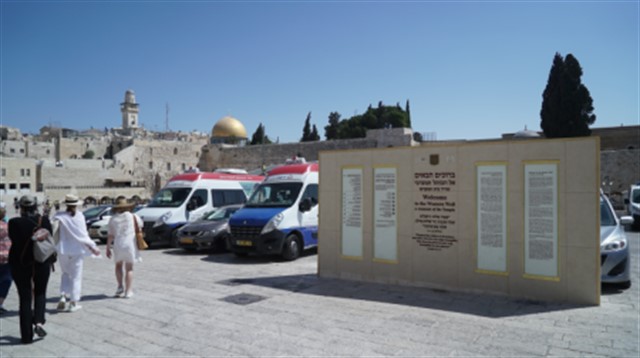 New signs have been put up at the Western Wall Plaza that show respect for the historic importance of the Kotel and for those who liberated the Old City and the Temple Mount.

New signs in English and Hebrew are currently being put up by the Western Wall Heritage Foundation at the Western Wall, the historic and sacred site visited by over 11 million visitors from around the world every year.  The new signs make the story and centrality of the Kotel in Jewish history and the story of those who liberated the Old City and the Temple Mount more easily accessible.  The Western Wall Heritage Foundation notes that The new signs are meant to give visual and accessible information to the millions of visitors who come to the Western Wall every year.  The signs were redesigned after a great amount of thought was given to the balance needed between making signs respectful of the site and the need to create signs that can withstand the weather and the masses of visitors wishing to be photographed with them.  After a great amount of work, we created the new texts singed on glass, backed with cement, and lit by special night lighting.

Besides giving directions and general rules of behavior, the new signs briefly explain the centrality of the Kotel in the history of the Jewish nation, the establishment of the First Temple that stood gloriously for centuries, the destruction of the Temple and the Jewish exile, the return of Jews to Jerusalem and the establishment of the Second Temple, its destruction and the long exile filled with yearning of If I forget thee Jerusalem, may my right hand wither and the prayer Next year in a rebuilt Jerusalem.

The new signs also tell the story that over the course of years, the Kotel was covered, its entire length of 488 meters was hidden from view with only a narrow alley left as a place of prayer and pilgrimage for Jews around the world.

The new signs also pay respect to the story of the liberation of the Old City and the Temple Mount, saying:

The reunification of Jerusalem brought the Jewish people from all around the world back to the ancient stones of the Western Wall.
On June 7, 1967 (the 28th of Iyar, 5727), after risking their lives in heavy battle, soldiers of the Israel Defense Force liberated the Western Wall and were among the first ones to stand by its stones, the most important and significant prayer site for the Jewish people. Among the soldiers were Infantry Brigade 16 HaYerushalmit, Tank Squadron HaYerushalmit, Mechanized Division 10 Harel, the Air Force, and the 55th Paratrooper Brigade Tip of the Spear.  Since then, thousands of pilgrims and visitors stream to the Western Wall daily, carrying a prayer in their hearts.