The Year When Hope Is Fulfilled

Rosh Hashana
Rabbi Shmuel Rabinowitz, Rabbi of the Western Wall and Holy Sites
Rosh Hashana is the first day of the new year according to the Jewish calendar. That day and the following day are holidays when Jews everywhere celebrate the beginning of the year. But the manner of this Jewish celebration is very unique. Actually, the holiday’s main ceremony is shofar blowing: on the morning of the holiday, usually in the synagogue and in the midst of the prayer service, the shofar is blown a measured number of blasts. Is this how Jews celebrate the beginning of the year? What does shofar blowing express, and how is it related to Rosh Hashana? 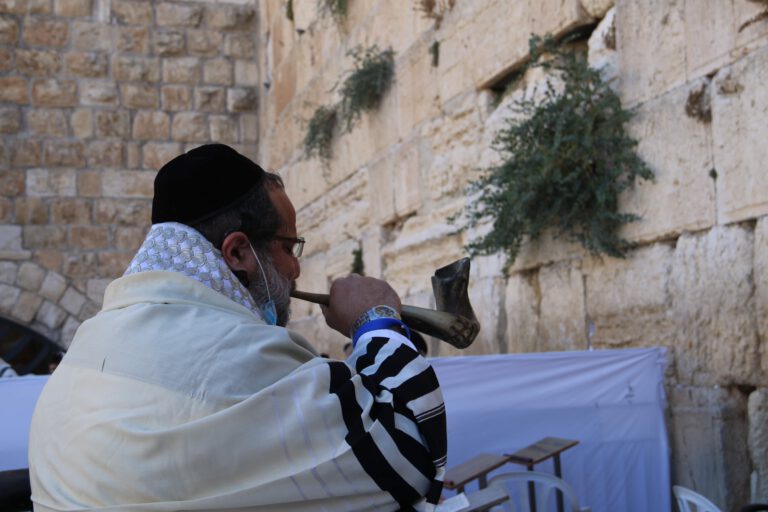 When we study the sources and the customs of the holiday, we notice the special emphasis placed on the topic of kingship.  On Rosh Hashana we declare G-d’s kingship in the world.  Kingship is not about control; G-d’s control of the world is absolute and does not necessitate man’s declarations.  Kingship, on the other hand, entails a certain relationship between a king and his subjects.  If the subjects do not accept the king’s status and what it implies, there is no kingship.  G-d is King of the Universe because we, human beings, accept His kingship and declare it.

What are we busy with on Rosh Hashana? With examining the significance of G-d’s kingship in the world and with anointing Him.  Blowing the shofar is the high point when we stand and express through the shofar blasts that we recognize G-d’s kingship and our choice to be His subjects.

Rosh Hashana is considered the Day of Judgement when G-d decrees what kind of year each person will have.  Will we merit health for the upcoming year?  A good livelihood? Satisfaction? Happiness?  All these questions are open and we must admit that the unknown is far greater than the known.  On Rosh Hashana, the Talmud teaches us, “all the inhabitants of the world pass before the Almighty.”  Every person gets his own personal examination in which it is determined what his fate will be during the upcoming year.
The connection between these two aspects of the holiday – the declaration of G-d’s kingship and Rosh Hashana also being Judgement Day is expressed in the words of the midrash:

This midrashic description connects the shofar blowing with judgement.  Through the shofar blasts we succeed in switching judgement to mercy.  Is this a “segula”? Magic?  Not at all.

When we declare at the beginning of the new year that we accept G-d’s kingship, and we express this by blowing the shofar, we become G-d’s emissaries.  We take upon ourselves the Jewish purpose of “repairing the world under the kingdom of G-d.”  G-d’s kingship is not a spiritual concept disconnected from reality.  In the world that G-d rules, life looks different, relationships among people are different, holiness prevails, pettiness must disappear.

Accepting G-d’s kingship is accepting a mission.  We, members of the Jewish nation, carry an important message to all of humanity.  The more we internalize the Jewish message embodied by the Torah and its commandments and express “kiddush Hashem” (sanctifying G-d’s name) with our actions, the better we carry out our mission.

Judaism’s message in a nutshell is: Repairing the world under the kingdom of G-d.  The significance of this message is important since Judaism is positioned between two opposites, between nihilism and hedonism, and between spirituality that calls for abstinence and human society. Judaism differs from both these extremes and speaks of a life of holiness within human society, of morality that does not erase the person but that establishes relationships between one person and another.  The kingship of G-d does not contradict the world and the world does not contradict the kingship of G-d.  Judaism’s expectation is that reality, as it is, will adjust to the spiritual values of holiness and morality.

As the New Year approaches, we declare our faith that the kingship of G-d can be actualized in reality, and we declare our willingness to act so that this hope is fulfilled.  We call this fulfilment, in its entirety – ge’ula, redemption.