Who Is Capable of Sin? Chukat
Rabbi Shmuel Rabinowitz, Rabbi of the Western Wall and Holy Sites
This week?s Torah portion, Chukat, tells us a short story describing the nation camped in the desert, thirsty for water. The terrible thirst leads them to complain to Moses and Aaron, the two leaders/brothers: ?Why have you brought the congregation of the Lord to this desert so that we and our livestock should die there? Why have you taken us out of Egypt to bring us to this evil place; it is not a place for seeds, or for fig trees, grapevines, or pomegranate trees, and there is no water to drink.? (Numbers 20, 4-5) 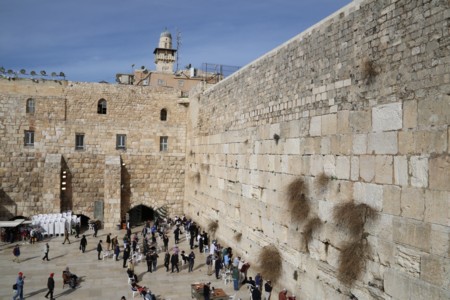 Moses and Aaron do not respond to the complaint, but God does, and in a completely practical manner. He instructs Moses and Aaron to go out to the people and – “Take the staff and assemble the congregation, you and your brother Aaron, and speak to the rock in their presence so that it will give forth its water.? (Ibid, Ibid 8). And wonder of wonders ? An abundance of water came out of the dry stone! Indeed, Moses and Aaron gathered the nation, hit the rock twice, and immediately ? ?an abundance of water gushed forth? (Ibid, Ibid 11).
But something in the way this miracle was performed was wrong. The Torah does not tell us explicitly what was done wrong, but God?s response was clear: ?The Lord said to Moses and Aaron, ?Since you did not have faith in Me to sanctify Me in the eyes of the children of Israel, therefore you shall not bring this assembly to the Land which I have given them.?? (Ibid, Ibid 12)
What was the sin of Moses and Aaron that led to the severe punishment of not entering the Land of Israel? One thing is obvious is in this short story: They were commanded to speak to the rock and instead, they hit it. Indeed, many commentators explain this to be their sin. Other commentators found it difficult to accept this explanation and searched for additional clues in the text that might point to the sin committed by Moses and Aaron. Generations of commentators dealt with trying to find alternative answers to this riddle. About half a century ago, Don Isaac Abarbanel, a biblical commentator and finance minister in Spain and Portugal, counted ten explanations written by sages in an attempt to answer this question. Three hundred and fifty years later, Samuel David Luzzatto, an Italian Jewish scholar, summarized additional explanations written by Jewish sages.
Because it really is astounding. The Jewish nation had no greater leaders than Moses and Aaron. Were it not for them, the Jewish people would not exist. They were the ones who led the nation as it came into being; Moses was the one who gave us the Torah; Aaron was the one who established the kehuna, the priesthood. It can safely be said that they were the most admired people by Jews of every generation. We might have expected Jewish scholars and sages to have left their sin in the realm of the mysterious and obscure, leaving their image holy and free of sin.
But Judaism did not go that path. The source is, of course, the Torah itself, that never tells us about ?perfect? people. A person, as impressive as he might be, is still a person, and he has the choice of sinning or not. Obviously, great people do not commit sins that are ugly or crude. They might trip on more delicate sins that would not even be considered transgressions for a regular person. But the bottom line is what is important here: The bible, the sages, all the scholars throughout the generations, did not shy away from intensively learning and explaining the sins of the two greatest personalities of the nation ? Moses and Aaron.
We can understand the message inherent in this attitude if we compare Judaism to other religions in which spiritual and historical leaders are considered infallible. Moreover, the Torah was written at a time when kings were considered gods, or descendants of gods, and therefore could obviously not be sinners. Judaism, however, makes a clear distinction between God and man. God is the perfect One, but man is always obligated to repair himself and strive for perfection.