First Comes Humanity
Rabbi Shmuel Rabinowitz, Rabbi of the Western Wall and Holy Sites
This Shabbat, we begin reading the third of the five books of the Bible: Vayikra, or Leviticus.  This book is also called ?The Torah of the Kohanim (Priests)? since it essentially deals with halachot, Jewish laws, pertaining to the priests in the Temple, and one of the main subjects is sacrificing sacrifices.
Many people interpret the Hebrew word for sacrifice, ?korban?, as surrendering something for the good of God, a sort of ritual of exchange whereby man gives his god an animal or some food item and through this concession he appeases his anger and pleases his god.  In Judaism, this interpretation is rejected for a simple reason: God, the Creator of all, and the All Powerful, does not need a thing; He does not ask humans to give up anything for Him or lose anything for Him.  The Jewish interpretation of the term ?korban? is from the Hebrew root of the word which means ?to get closer?.  Through the act of sacrificing, a person (Jew and non-Jew alike) comes closer to God.  The sacrifice is an expression of a close, intimate relationship between man and God. 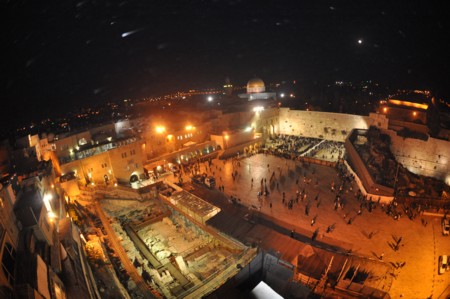 In the books of Prophets written during the First Temple period and even before, we find great criticism of what was then the prevalent concept of sacrifices in the Jewish nation.  Samuel, Isaiah, Michah, Hosea, and Jeremiah often admonished the nation that saw ritual sacrifice as a way to atone for moral and social injustices.  These prophets did not object to the sacrifices themselves; they were loyal to the Torah that commanded sacrifices, and some are documented as having sacrificed sacrifices themselves.  And yet, they fiercely objected to making the sacrifices the basis of worshiping God at a time when the nation was in dire need of moral reform.
This perspective is not obvious.  We do not find such an attitude regarding any other commandments.  For example, a Jew who does not put on tefillin (phylacteries) on a daily basis is not told that due to his spiritual state he is exempt from keeping Shabbat.  Every commandment has its own privilege and obligation and not fulfilling one commandment does not conflict with the fulfillment of another.  It is only in regards to sacrifices that we find an outlook that says that so long as the nation is not morally upright, there should not be sacrifices.  Why is this?
The explanation for this lies again in the interpretation of the word ?korban? as being connected to the word for closeness.  Meaning, in Judaism, the sacrifice is an expression of the close relationship between man and God.  But in order for man to get closer to God, he must be worthy.  The clear-cut demand expressed by the prophets is that man must live up to the high standards of morality.  Only a person who acts with compassion, does acts of charity, opens his heart to others ? only such a person is worthy of being close to God.
This perspective that guided the admonishments of the prophets, and about which they warned time and time again, was that the sacrifice was not a means through which man could surrender something and thus appease God?s anger.  This misconception led people to behave abominably, only to then rush to the Temple to sacrifice a sacrifice and assume mistakenly that they had been saved from God?s wrath over their misdemeanor.  The prophets wanted to abolish this misconception and even warned that it would lead to the destruction of the Temple.
And indeed, the Temple was destroyed.  God does not want sacrifices that are sacrificed based on this misconception.  So, He stopped, and still prevents, us from sacrificing sacrifices to Him.  Even after the Temple?s destruction, we have to root out this mistaken concept and internalize the prophet?s perspective which sees sacrifices as the second stage of worshipping God.  First, we must be moral and honest people, and only when we create a morally upright society that has compassion for the poor and unfortunate and helps them ? only then will we be privileged, with God?s help, to have that intimate and lofty closeness that comes through sacrifice.