The Grace of Existence ? Parashat Beshalach
Rabbi Shmuel Rabinowitz, Rabbi of the Western Wall and Holy Sites
Seven days after the Exodus from Egypt, which we read about last week, the nation stood on the shores of the Red Sea and expected redemption.  The sea blocked their route ahead of them and the Egyptian army with its speedy chariots threatened them from behind.  There was no escape.  And just when they felt utter despair, God instructed Moses: ?Speak to the children of Israel and let them travel.?  Travel?  To where? Into the sea?! 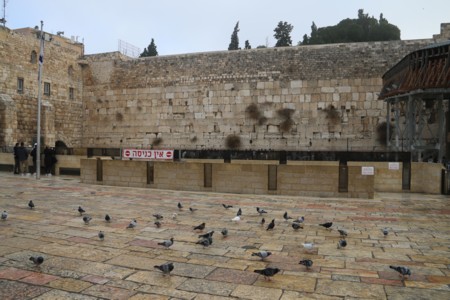 The sages of the midrash say that at this moment, an argument broke out among the different tribes of Am Yisrael.  No one was willing to take the seemingly suicidal step of jumping into the water.  One person ? Nachshon ben Aminadav of the tribe of Judah ? had the courage to jump.  The nation stood there anxiously and watched Nachshon struggle in the waves.  And then a moment before he drowned, when the water was already over his head, a tremendous miracle occurred and the sea split into two with a wide, dry path.  And the nation ran across the sea.  The Egyptians chased them into the sea but when they got into the middle of it, it returned to its natural state and the mighty Egyptian army drowned.
The nation that walked up from the sea unharmed and saw its enemy ? that had just recently enslaved it ? drown before its eyes, broke into song.  This song is called Shirat Hayam ? the Song of the Sea ? and we read it in the synagogue this Shabbat.
The continuation of the journey was no less wondrous.  A month after the Exodus, the nation?s supplies ran out.  They were left with no food and no way to survive in the barren desert.  Again, the nation despaired and complained to Moses.  And again, God responded. He brought bread down from the heavens; a miraculous food called manna.  This bread came down every day at daybreak with dew above and below it to keep it clean.
But on one day a week the manna did not fall ? on Shabbat.  The food for Shabbat came down on Friday with a double portion to feed the nation on Friday and on Shabbat.
We read the story of the Parting of the Sea twice a year ? when we read Beshalach and on Passover.  And we remind ourselves of it every Shabbat when we use two loaves of bread on a special tray or tablecloth, covered to remind us of that double portion that fell from heavens in honor of Shabbat that was wrapped above and below.
Judaism does not ?see? God only at the Parting of the Sea, but also in everyday existence, in a portion of bread.  Every Shabbat, we acknowledge that the bread on our table is a gift from God; just like the gift of manna our forefathers received in the desert.  We thus express our faith that sustenance is not to be taken for granted, but is a wondrous kindness, God?s grace.
When Shabbat is over, we want to preserve that special flavor of grace.  So, during the havdala service we use Isaiah?s words that express our dependence on God?s grace, ?Here is the God of my salvation, I shall trust and not fear? (Isaiah 12, 2).
A person who lives with the awareness of grace, does not keep it to himself.  He strives to pay it forward ? to be kind to others.  A person who sees each piece of bread as a gift learns to give to others and participates in the beautiful dynamic of bequeathing to those around him.