The Future that Changes the Past
Rabbi Shmuel Rabinowitz, Rabbi of the Western Wall and Holy Sites
This Shabbat when we read Parashat Beshalach is also termed ?Shabbat Shira? for ?Shirat Hayam? (The Song of the Sea) which we festively read on Shabbat morning in the synagogue.  When and why was Shirat Hayam said?
Six days after Am Yisrael was liberated from Egypt, it reached a dead end.  The desert and the sea enclosed it from three different directions and behind it ? the powerful Egyptian army was approaching to return it to slavery and oppression in Egypt.  It seemed that all the events of the past year ? the ten plagues and the wondrous Exodus from Egypt ? were for naught.  It seemed that the promises Moshe made in the name of God were not going to be fulfilled.  Desperation took hold and the nation reached an abyss that could only be grasped by someone who tasted freedom only to understand that it was out of reach. 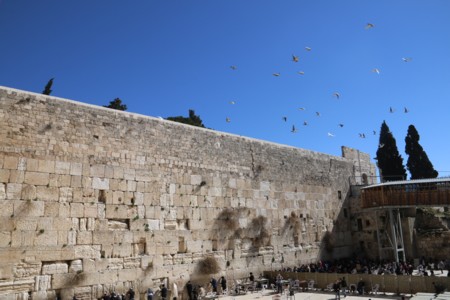 Then the greatest miracle of all happened: The sea split into two and the nation walked across it.  The Egyptian army saw nature collapse before its very eyes, the sea split and the Jewish nation crossed between its halves, but the Egyptians could not admit defeat.  They also entered the sea and hoped to cross it and capture the Jewish nation escaping to freedom.  But God Who could split the sea, also knew when to release the huge walls of water onto the heads of the Egyptians.  The walls collapsed and they drowned in the sea along with their elaborate chariots of war.
When the liberated slaves saw the bodies of their former Egyptian slave-masters washed up on the shore; when they realized that the freedom they tasted was not imaginary but was real; when they saw God?s supervision and protection with their own eyes ? they burst into song.  This is Shirat Hayam whose description begins with the following words:
?Then Moses and the children of Israel sang this song to the Lord, and they spoke saying??
(Shmot 15, 1)
A simple reading of this verse reads the word ?az? as ?then? ? the description of a specific time.  Then, after the ?splitting of the sea?, this song was sung.  But the sages of the midrash, in their profound way, add additional meaning to the seemingly simple word ?then?:
?Moshe said to the Blessed Be He: I know that I sinned before You with ?Then?, as in ?Since then when I came before Pharaoh to speak in Your name, things got worse for this nation, and You did not save them?, and you drowned him (Pharaoh) in the sea, and therefore I praise You with ?then?.?
(Shmot Raba 23, 3)
The sages of the midrash surveyed the use of the word ?then? in Moshe?s speech, and discovered that the previous time he used it, it was with a completely different tone.  It was after Moshe was sent by God to warn Pharaoh, king of Egypt, that he must liberate the Jewish nation from the yoke of slavery, but Pharaoh did not only not heed the warning. He made the burden harder and took away the enslaved nation?s most basic necessities.  Moshe could not handle this failure and complained to God.
Following the ?Splitting of the Sea?, our sages tell us, Moshe remembered his complaint.  Now he understood that his vision had been limited and his complaint unjustified.  Now he internalized that the process that took place was not coincidental, but was planned, and that it was Pharaoh?s imperviousness, wickedness, and pride that led him to this same overwhelming defeat at the Splitting of the Sea.  This is what Moshe emphasizes at the start of Shirat Hayam.
Already in the very first word of Shirat Hayam we discover an amazing secret.  We see the present, remember some of the past, but we have no knowledge of the future.  Undoubtedly, there are many instances in which we would see the present differently if we only knew how the future would unfold further down the road.
However, there is no need to wait for the future in order to better understand the present.  A life of humility and faith leads us to seeing the present in a different light, even when it seems less than positive.  Who knows what good might result from the hardship we are experiencing? Who knows what light we might discover from within the darkness?  Humility is necessary for us to admit we do not know everything; faith is necessary so that humility does not lead us to exaggerated apprehensions but rather to enlightening optimism.  True, we do not know everything.  But there is someone who does and we know we can trust in Him.