A Rare Stamp was found in excavations near the Western Wall 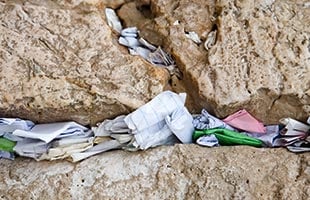 To the Minister of the City  A rare stamp from the First Temple period with ancient Hebrew writing was discovered in excavations conducted by the Israel Antiquities Authority at the Western Wall in Jerusalem.
The important finding was discovered during excavations conducted by the IAA in conjunction with the Western Wall Heritage Foundation. According to the excavation director, The Bible mentions two city ministers of Jerusalem. Discovery of this stamp proves that whoever held his position was active in the city 2,700 years ago.
A rare and significant archeological discovery was made during archeological excavations being conducted by the Israel Antiquities Authority in conjunction with the Western Wall Heritage Foundation at the Western Wall Plaza: A First Temple period stamp that had belonged to Jerusalems City Minister  the senior municipal position in Jerusalem 2,700 years ago. This stamp is an unusual piece of clay that was stamped and refined by fire. It is 13 x 15 mm, and 2-3 mm thick. Two images facing one another are visible on the upper part of the stamp, and the ancient Hebrew writing is on the bottom part.
The stamp, whose use is unknown, was discovered by the excavation director, Shimon Cohen, while wet-sifting through findings of a structure from the latter part of the First Temple period (6th-7th centuries BCE). Dr. Shlomit Wexler-Bdolach, the IAA director of excavations across from the Western Wall Plaza said, It could be that it was enclosed with some sort of important package and served as a sort of logo or a small memento that was added to packages sent by the city minister. Dr. Wexler-Bdolach added that, It is not inconceivable that one of the structures in our excavation zone was the destination of the package sent. The finding of the stamp of this prominent position and the collection of other stamps discovered in this structure in the past strengthen the position that a residential area of people who held senior positions in Jerusalem during the latter days of the First Temple period existed here, in the area of the present-day Western Wall Plaza on the western hill of ancient Jerusalem, about 100 meters west of the Temple Mount. Wexler-Bdolach added, This is the first time a stamp like this was found in an archeological excavation. This is archeological evidence of what is written in the Bible about the existence of a city minister in Jerusalem 2,700 years ago.
Professor Tali Ornan of the Hebrew University of Jerusalem and Professor Binyamin Zass of Tel Aviv University researched and describe the stamp. On a double line, there are two men facing one another, one almost the mirror image of the other. Their heads look like large points with no details. The arms, facing out, are hanging down loosely and the hands are facing inward and slightly raised as though grasping something together, perhaps a crescent. Each of the two images is wearing a striped garment reaching about to the knees that are unmarked. Under the line it says in Hebrew ancient writing To the City Minister without separation between the words and without the definite article.
The title city minister is known from the Bible and from external sources and it refers to the person in charge of the city appointed by the king. Mention of Jerusalem city ministers that were appointed by the king to this most prominent position appear in the Bible twice  in Kings II, Yehoshua, Jerusalem city minister in the days of King Hezkiyahu is mentioned, and in Chronicles II there is mention of Maasiyahu who was Jerusalem city minister in the days of Yashiyahu.
According to IAA Jerusalem region archaeologist, Dr. Yuval Baruch, The extraordinary importance of these findings has led the Authority to conclude that this special structure from the First Temple period, discovered at the Western Wall Plaza, should be preserved and developed as a tourist site for the general public.
The preservation work at the site under the auspices of the Israel Antiquities Authority was directed by Yossi Vaknin and Chaim Mekoriya.