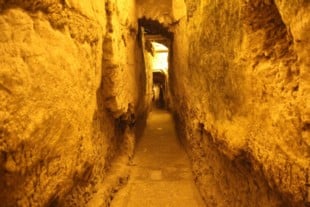 A Peek into the Western Wall Tunnels

The entrance to the Western Wall (Kotel) Tunnels is currently located on HaGai Street from which one can already see the arches that held up the Great Bridge that led to the Temple Mount during the Second Temple period. The bridge was used by pilgrims coming to the Temple Mount from the Upper City. In addition, the lower aqueduct passed through bringing water from Bethlehem to Jerusalem. Today the Old City’s HaShalshelet (Chain) Street passes through that spot. 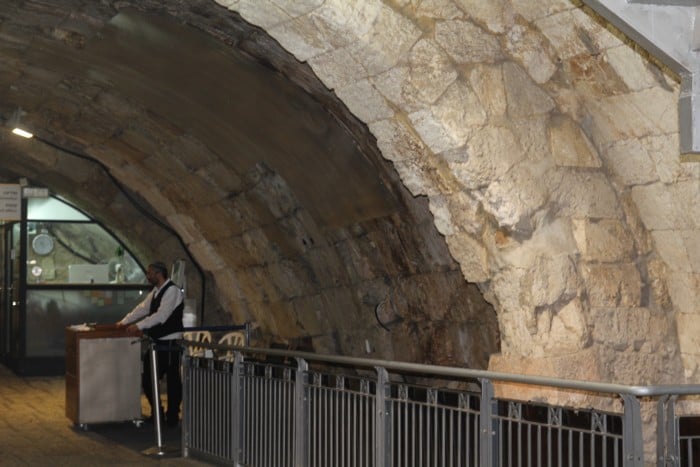 Model at the Entrance

A visit to the Western Wall Tunnels begins with an overview of the construction stages of the Temple Mount with the help of a unique model accompanied by a film. We see Mount Moriah, the site of the Binding of Isaac, and of the Foundation Stone from which the world was created, in addition to the Herodian and Muslim constructions. We will learn where the Western Wall Plaza stands in relation to the general view of the area in the past. 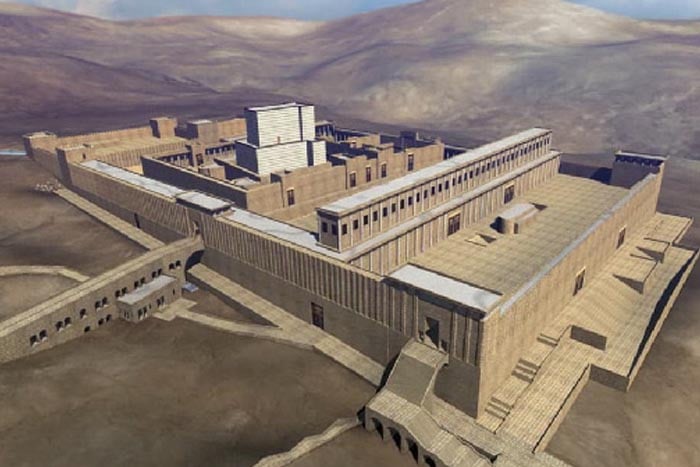 This is a long east-west underground passageway under HaShalshelet Street. Charles Warren, the archeologist, called it the Hidden Passageway based on 15th century sources surmising that the passageway was used by Kind David to get from his palace on the site of the Tower of David near Jaffa Gate to pray on the Temple Mount. The southern wall in the passageway was built during the Roman period, and the northern wall is actually the front of the Great Bridge leading up to the Temple Mount. 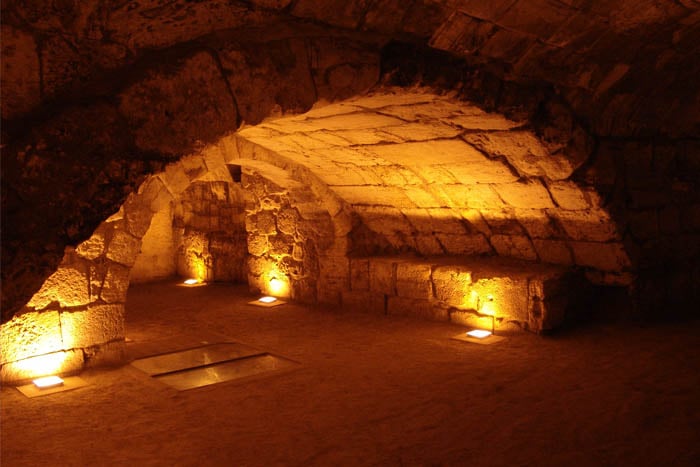 The Kohahim, priests, of Jerusalem, apparently walked across this tall and wide bridge on their way to the Temple. Their white clothes swept across the slight incline as one of the most magnificent and monumental gates of the Temple Mount rose above them.
Like the Kohanim, all the other visitors to the Temple also ascended the Temple Mount with great deference. Before going up to the Mount, they immersed in one of the tens (perhaps hundreds) of ritual baths that were situated around it. And thus, pure and excited, they approached this holy site. A number of ancient ritual baths were found in the Western Wall Tunnels. Glass placed on the floor of the Great Bridge allows visitors to see two-thousand-year-old stairs. These are the stairs of a large ritual bath used by our ancestors during the Second Temple period. 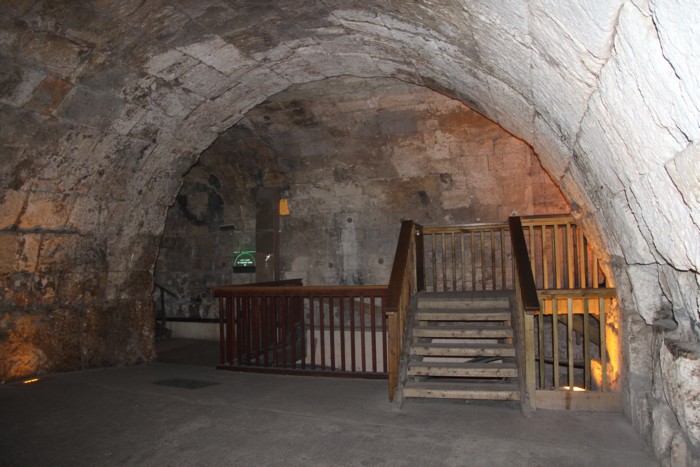 Here for the first time, under the Mamluk-period buildings, we see the Western Wall stones in all their glory with their chiseled edges and enormous boulders, a breathtaking example of the construction methods during the Herodian period. The largest course is called Nidbach Raba – The Master Course. Its stones are the largest ever found in Israel. This course of stones was evidently intended to stabilize the stones beneath it and to protect the Western Wall from earthquakes. The course is made of huge boulders, the largest of which is 13.6 meters (45 feet) long, its estimated depth is between 3.5-4.6 meters (11½ – 15 feet), and its height is 3.3 meters (11 feet), with a weight of 570 tons!!! The wall was constructed using the ‘dry method,’ that is, no cement or any adhesive material was used to connect the boulders to each other.
In order to enable visitors to get the best impression of the size and power of these boulders, the floor of the Tunnel was deepened in this area to expose the Wall’s deepest course. 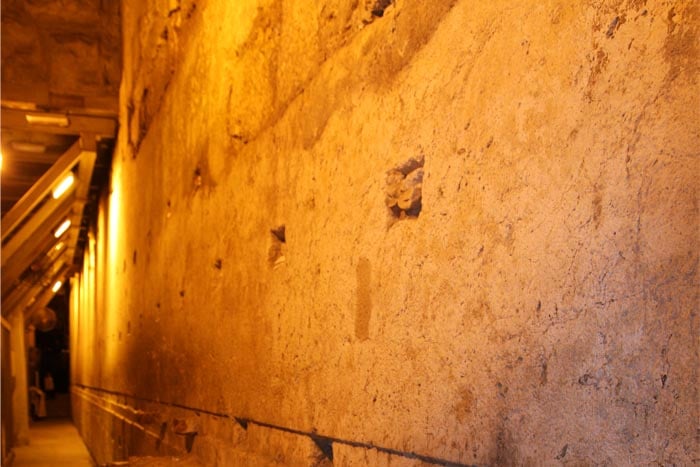 This gate near the Western Wall is from the Second Temple period and was reached by a staircase from the street below. During the Middle Ages, there was evidently a synagogue on the site called The Cave, used by Jews until the Crusader conquest in 1099. Charles Warren, for whom the gate is named, first discovered it when he was exploring the water shaft under the Temple Mount (shaft no. 30). This is the closest place to the Foundation Stone on the Temple Mount as well as to the site of the Temple’s Holy of Holies, and is today the site of a small women’s prayer section. On a raised porch opposite Warren’s Gate is a long and narrow synagogue that was established to commemorate the original Cave synagogue by the late Rabbi Meir Yehudah Getz, former Rabbi of the Western Wall, and is named for him. The entrance to the synagogue can be reached only through the Western Wall Tunnels. 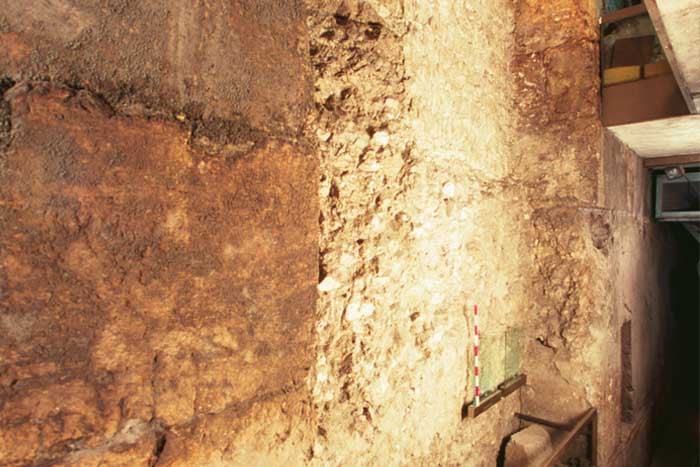 This passageway contains glass floors through which visitors can see stones of the Western Wall hurled by the Romans during the destruction of the Second Temple, as well as the foundation of the Wall. Along the passageway adjacent to the Wall there are water pits that were constructed under the Old City homes during the Middle Ages. 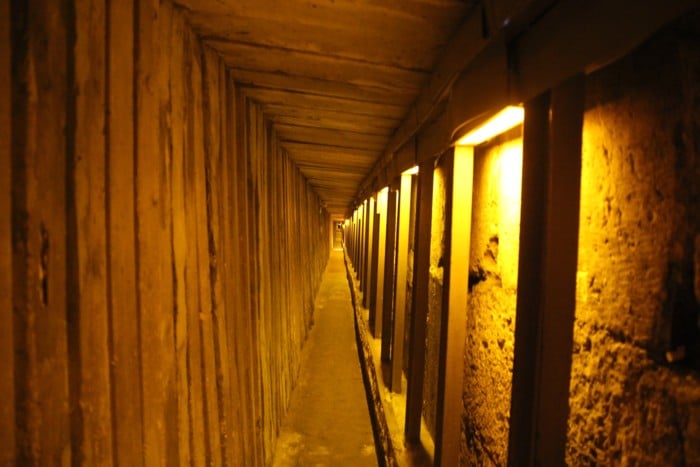 Along the Western Wall there was a long street starting from the lower city, The City of David, and continuing almost to the far end of the Western Wall. The street served as a central market for Jerusalem’s residents during the Second Temple period, with shops located along its sides where pilgrims would buy animals for their sacrifices and put together the ingredients for the incense used in Temple rituals. Work on the street stopped during the Great Revolt and was never completed, probably due to Herod’s death. One can still see boulders on the site that were intended for paving the street, although the builders never did get to lay them. 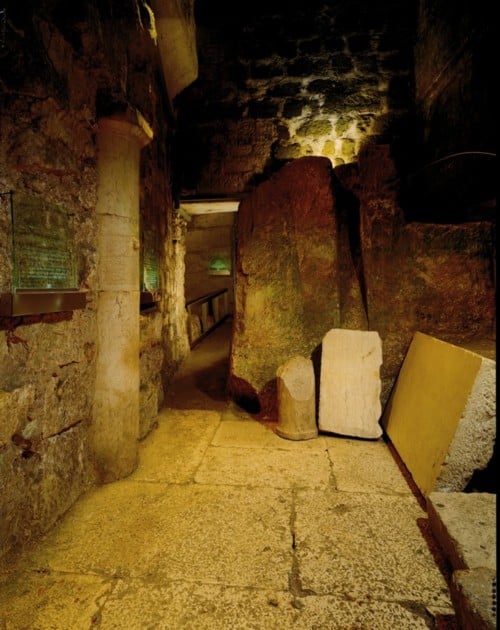 At the end of the above-mentioned street that was never completed, there is a small quarry. Based on the measurements done on the site from where stones were mined, and from the remnants of the mined stones, it seems that these stones were intended for construction of the Western Wall. On the site visitors can watch a short film depicting how these stones were quarried, moved, and etched. 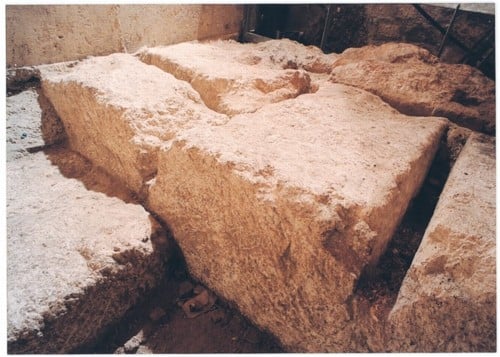 Along the northern edge of the Western Wall, there is an entrance to a Hasmonean-period aqueduct, an especially beautiful one dug directly into the original rock. It is 80 meters (263 feet) long, 1.2 meters (4 feet) wide and 12 meters (40 feet) high, and brought water to the Temple during the Second Temple period. Because no openings were found on the Western Wall site through which the water could have reached the Temple area, researchers have concluded that once the Wall was constructed, this water aqueduct ceased operating.
The tunnel was first discovered in the mid-1800s when the foundation was being built for the Sisters of Zion Monastery on the Via Dolorosa. However, when archeologists, among them Wilson and Warren, reached the site, they could not estimate when the aqueduct was dug nor where it led, and they did not realize that they had uncovered an impressive water project. The Hasmonean water aqueduct was uncovered again in 1985 during the excavations of the Western Wall Tunnels, when suddenly, at the end of the Tunnel, researchers uncovered an entrance to it. 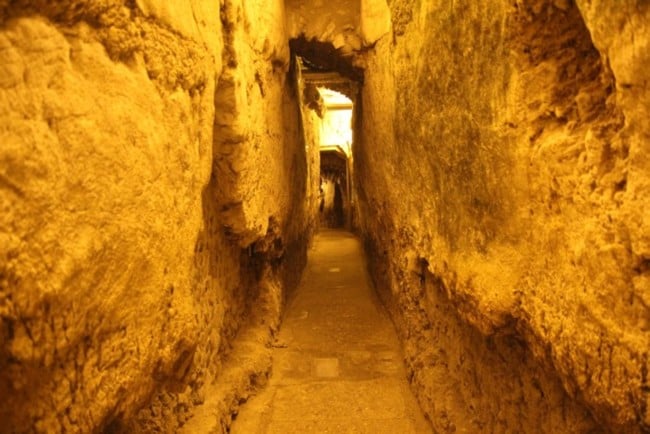 This pool served Jerusalem residents and pilgrims as a reservoir for drinking and cooking water. It is 53 meters (175 feet) long, and is full of water. About 1/3 of it can be seen under the Western Wall Tunnels, with the rest located under the Sisters of Zion Monastery. Despite its large size, during the Second Temple period it was the smallest pool in Jerusalem and was therefore named after this small bird, the Strotiyon – in Greek. 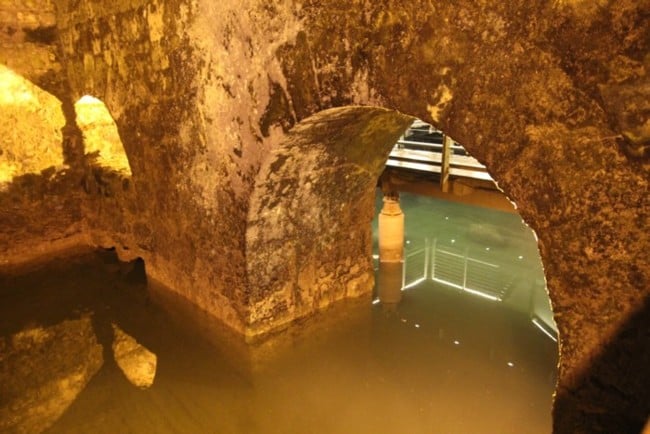