One Generation Joins Another ? Bamidbar
Rabbi Shmuel Rabinowitz, Rabbi of the Western Wall and Holy Sites

One of the central stories in this week?s Torah portion, Beha?alotcha, is the story of the ?mitonenim?, the complainers. The nation complained about the difficult journey through the desert, saying they missed their relatively-comfortable life in Egypt. Moses, the leader of the nation, who knew what the nation had experienced, turned to G-d and asked Him to help the nation with their hardships and lack of food. In response, G-d promised an abundance of food ? which indeed happened immediately.

Furthermore, in light of the personal hardship Moses expressed when facing the nation?s complaints, G-d instructed him to share the leadership with seventy of the nation?s elders. And this is what he did. On the fringes of this story, there is another short story, almost like an addendum, that we will focus on:

The lad ran and told Moses, saying, "Eldad and Medad are prophesying in the camp!"

Joshua the son of Nun, Moses' servant from his youth, answered and said, ?Moses, my master, imprison them!"

Moses said to him, "Are you zealous for my sake? If only all the Lord's people were prophets?

What we see here is a story of two people who experienced a prophetic revelation independently, not together with Moses and not nearby. They were ?prophesying in the camp?. Three people respond in this short story: an anonymous lad, Joshua, and Moses. The frightened lad runs to Moses and informs him that Eldad and Medad are prophesying in the camp. Obviously, his intent was to report to Moses on a problematic, possibly criminal, activity.

Joshua, Moses? servant, responded accordingly: ?Moses, my master, imprison them!?. Joshua?s response stems from concern for the unity of the nation, fear of someone undermining Moses? authority. If there are people prophesying independently, then Moses is not the only channel of communication between the nation and G-d. Even if these are true prophets, tomorrow, false prophets could claim that they too experienced a revelation and received instructions to return to Egypt! The concerned Joshua suggests a practical solution: to imprison Eldad and Medad, the two independent prophets, and nip this problem in the bud. Thus, leadership will remain in responsible hands.

But Moses reacts completely differently. On the contrary, he says, there is no reason for fear or concern. ?If only all the Lord’s people were prophets?? I wish, says Moses, that I weren?t the only prophet, that not only Eldad and Medad were prophets, but that every Jew would be a prophet! Moses trusts the nation. Anyone can reach the peak. There is no one who was born to be on the top of the mountain while others were fated to remain at the bottom. Everyone is welcome to climb up and whoever makes the effort will attain results.

Moreover, from the beginning of Moses? response to Joshua, he says ?Are you zealous for my sake?? Rabbi Shimon Bar Yochai said that the prophecy of Eldad and Medad was to a certain extent disrespectful of Moses. This is how he interpreted the content of their prophecy:

?What prophecy did they prophesize? They said: Moses will die, Joshua will bring the Israelites into the land.?

This addition puts the story in a whole new light. This is not just any independent prophecy or some hypothetical concern. These were the beginnings of a real revolt. Eldad and Medad claim that Moses will not merit completing his life?s journey and will not be bringing the Jewish nation into the Promised Land.

It is important to note that we, who know the way the story unfolds, know full well that this is indeed what occurred and that Eldad and Medad?s prophecy was true. But to those who heard it then, it was such a breach of authority that it could only be interpreted as a revolt against Moses? leadership. Now we can better understand the lad?s panic when he ran to Moses to inform him that Eldad and Medad were prophesying in the camp.

Now the greatness of Joshua and Moses really shines. Eldad and Medad crown Joshua as Moses? successor, but Joshua ? not only does not get tempted by their words, but he tries to put down what looks like a revolt and suggests to Moses that they be imprisoned so their words do not reach the nation. Joshua displays complete and total loyalty to Moses.

These were the two first leaders of the Jewish nation: Moses, with more humility than anyone else in the world, and Joshua, who was dedicated and loyal. These are the leadership traits we should all learn from these two leaders. 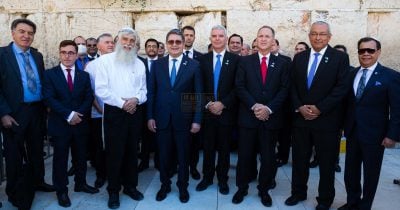