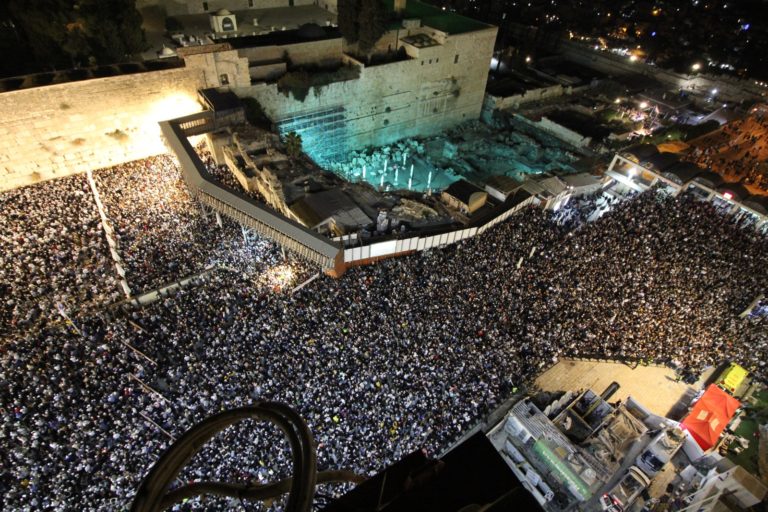 Rabbi Shmuel Rabinowitz, Rabbi of the Western Wall and the Holy Sites

The Talmud describes that even the Ruler of the Universe puts on His own tefillin. And the verse ומי כעמך יש?ראל גו?י אחד בארץ – And who is like Your people Israel, one nation in the world  is written in these tefillin. Rabbi Levy Yitzhak of Berditchev, of blessed memory, would quote the Talmud while standing to pray for Am Yisrael and plead to Hashem A Jew who drops his tefillin, immediately picks them up, kisses them and strokes them. See that Your tefillin, Am Yisrael, are falling  will You not pick them up immediately, kiss them and stroke them?

I am sure that Rabbi Levy of Berditchev envisioned the entire Jewish Nation standing together in prayer. And here, we have merited that two hundred years later we are living  not envisioning  the tens of thousands of Jewish People standing together in prayer. More than one million people came from all over the world to say Selichot at the Western Wall. Men and women, young and old – one nation in the world, as one man in one heart.

This picture, taken on the last night of Selichot, on the eve of Yom Kippur (credit: Yisrael Bardugo), speaks of a greater truth than thousands of words. This picture describes the true and deep connection between Am Yisrael and Hashem, together with His heritage and Holy City. I am placing this picture before the Divine, and pleading that which King Solomon did in his time: That Your eyes may be open toward this house  to listen to the prayer. See, Lord of the Universe, see Your sons and daughters, standing united at the Western Wall and calling out Your name with one heart. This is the true heartbeat of the Jewish People, and it is deeper than any fight or dispute. Forgive us, pardon us, and bless us with a good year.