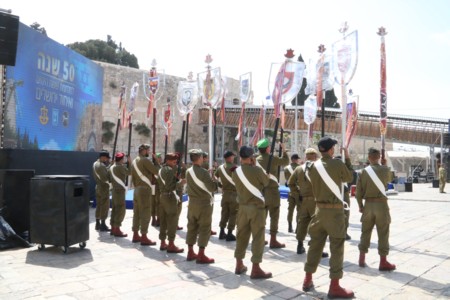 On Wednesday  Jerusalem Day  there was a huge assembly, among the largest ever seen at the Western Wall Plaza, to thank God for the liberation of the Western Wall and the reunification of Jerusalem.
Approximately 100,000 youth participated after walking and dancing from the center of Jerusalem toward the Western Wall, bearing flags and rejoicing with Jerusalem. The annual Flag Dance is in memory of Rabbi Yehuda Chazani, of blessed memory.
A Torah scroll was dedicated during the assembly, donated by the Falic Family in memory of those who fell liberating Jerusalem and in honor of the IDF soldiers who fought in the Six Day War.  The thousands of celebrants danced and sang in honor of the Torah and of Jerusalem, just as Rabbi Goren, obm, did when he came to the Western Wall with a Torah scroll for the first time on the 28th of Iyar 5727 (June 1967).
The main assembly opened with words by the Rabbi of the Western Wall, Rabbi Shmuel Rabinowitz, who recited a Psalm of thanksgiving with those gathered on the Plaza.  Moving speeches were made by the Rishon LeZion and Chief Rabbi, Rabbi Yosef, Minister of Education Mr. Naftali Bennet, Jerusalem Mayor Mr. Nir Barkat, Minister for Jerusalem and Heritage Affairs Mr. Zeev Elkin, Rabbi Yaakov Novik, chairman of Am KeLavi who initiated the march, and Mr. Simcha Falic who donated the Torah scroll.
The singer Yaakov Shwekey and his band performed at the event.
The event was in cooperation of: The Ministry of Education, The Ministry for Jerusalem Affairs, The Western Wall Heritage Foundation, The Jerusalem Municipality, Am KeLavi, and the Falic Family.