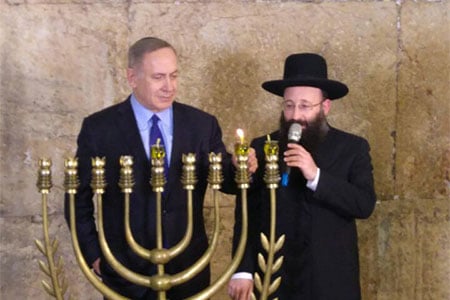 “I did not plan to be here tonight,” the Prime Minister said before lighting the candles at the Western Wall, “but in light of the UN resolution I thought that there was no better place to light the second Chanukah candle than the Western Wall.”

Of course the Palestinians arrived much later. We were in these places. We will return to these places, and I ask those same countries that wish us a Happy Chanukah how they could vote for a UN resolution which says that this place, in which we are now celebrating Chanukah, is occupied territory?

He then lit the candles together with the Rabbi of Western Wall and Holy Sites, Rabbi Shmuel Rabinowitz. The Rabbi of the Western Wall stated, “The relationship between Israel and the Temple Mount and the Western Wall does not need anyones approval. More than two thousand years have passed since our ancestors, the Hasmoneans, arrived and relit the Menorah in the Temple. For over two thousand years, all around the world, the small but mighty flames of the Chanukah Chanukiah have been burning.


The Western Wall unites the entire Jewish nation  young and old, those who live in Israel and those who live in the Diaspora, members of this generation and of all those who preceded it. I think of them this evening  of those who lit Chanukah candles in Spain of the Inquisition and in Poland of the Nazis, of Anusei Mashad and of the victims of Chmelnitzki. I know they are watching us this evening. Watching you  Mr. Prime Minister. How they are praying for your success.
We are blessed to have been privileged to light Chanukah candles in a united Jerusalem. From here, we pray for your success, that you should be a good emissary for the Jewish nation. The light that emanates from here, the light of Jewish unity, the light of hope, the light of the Jewish chain of generations that was never disconnected and never will be  This light will defeat the darkness.”