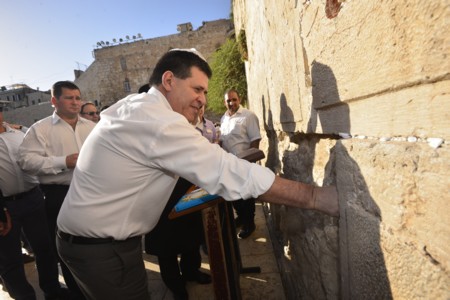 During the visit, the President prayed in front of the Western Wall stones and placed a note between the stones.

President Cartes did not hide his excitement from the visit to the site and expressed great interest in Jewish history.  He noted his friendship with the State of Israel and said that visiting the Western Wall was, for him, an act of identification with the spiritual values of the Jewish nation.

Rabbi Shmuel Rabinowitz spoke and said that the secret wishes of millions of Jews throughout the generations have been whispered near these stones. King Solomon requested that the prayers of Jews and non-Jews alike be accepted from the Temple. Jews who pray in synagogues around the world face this site.

The President wrote in the Western Wall’s visitors book that he is grateful for the privilege of being exposed to the history of this holy site and was very excited to touch these sacred stones.  I leave on these lines the greatest feeling in my life that I experienced today where I could see all  in the meeting place of all religions.  I am here in order to pray in my own name and that of my country of Paraguay.  I wish peace and love to all of humanity, wrote the President.