There Is A Certain People

Rabbi Shmuel Rabinowitz, Rabbi of the Western Wall and Holy Sites
The month of Adar is the last month in the ancient Hebrew calendar year which begins with the month of Nisan, the month of redemption.  This is a summary month that gathers all the lessons we?ve learned throughout the year, with all its peaks and valleys, and creates out of them one utterance from which we should learn. 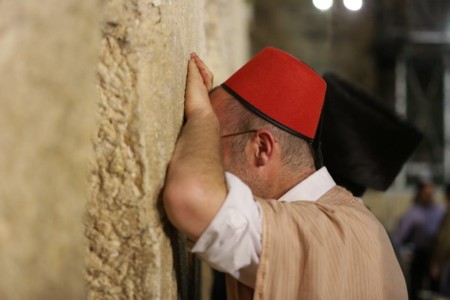 That incredible utterance was actually said by the great enemy of the Jews ? Haman, the son of Hamdata HaAggagi.  Haman said to Achashverosh, ?There is a certain people scattered and separate among the peoples throughout all the provinces of your kingdom, and their laws differ from [those of] every people, and they do not keep the king’s laws; it is [therefore] of no use for the king to let them be.?  It was not our choice to be dispersed among the nations, but despite this dispersion, we remained ?a certain people?.

Haman was not able to see beyond the current political reality.  He saw the Jews dispersed in various places, speaking various languages, keeping various customs, and he concluded from this that they are a weak and vulnerable nation that could be easily destroyed.  But facing him, with G-d?s graces, were two people who knew full well the secret of the Jewish nation?s strength.

In the face of the imminent tragedy, Mordechai calls for Esther and says, ?Do not imagine to yourself that you will escape in the king’s house from among all the Jews. For if you remain silent at this time, relief and rescue will arise for the Jews from elsewhere, and you and your father’s household will perish?. Helping her Jewish brothers and sisters was not only Esther?s privilege, it was her obligation.  We are one nation, in which brothers take care of each other, just as Joseph and Judah took care of Benjamin, Mordechai?s and Esther?s ancestors.

Esther understands and answers him, ?Go, assemble all the Jews?.  The decree would not be nullified because of the prayers of one individual.  Only a united nation could face this horrible threat of destruction.  And indeed ? a united nation is revealed in that same mass prayer for Esther?s success.

It is no coincidence that Chazal, our sages, told us to mark the miracle of the Purim salvation through mishloach manot ? gifts of food or drink.  It is a heartwarming commandment that expresses connection among members of a community.  This is the message of the month of Adar and of Purim: the relief and rescue that come through solidarity and unity.

An entire year has passed.  Together, we left Egypt.  Together, we received the Torah.  Together, we mourned the destruction of Jerusalem?s walls and of the Temple brought about by baseless hatred.  Together, we renewed our acceptance of the kingship of Heaven, we atoned for our sins, and went out into nature to sit in Succot as our forefathers had.  None of this would have taken place had we not done it together. None of this will continue if we do not learn to continue being together.  Haman was right.  ?There is a certain people?.  And that is the secret of its eternity.