Parashat Bechukotai – outside of israel 5778

A Moral Constraint for a Religious Experience
Rabbi Shmuel Rabinowitz, Rabbi of the Western Wall and Holy Sites
The Torah portion that seals the book of Vayikra / Leviticus is Bechukotai. The book of Vayikra is known as the Torah of the Kohanim (Priests), meaning ? it details the halachot, the Jewish laws, relating to kohanim and to their work in the Temple, with focus on offering sacrifices. At the end of the portion, which comes at the end of the book, we find a list of ?hilchot erchin?, laws pertaining to worth: a man who vows to give to the Temple his own worth or the worth of someone else has to pay a certain sum, determined by various criteria.
Having these laws at the end of the book of Vayikra led the sages of the midrash to see them as hinting at a serious and painful practice that was prevalent among idol worshippers in ancient times: human sacrifices. The Torah?s attitude toward this was written explicitly. It finds this practice abhorrent and was unequivocally against the very concept. 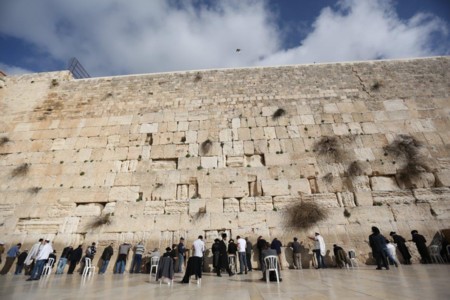 In the book of Devarim / Deuteronomy, Moses gives a speech before the nation about to enter the Land of Israel in which he warns them:
When the Lord, your God cuts off the nations to which you will come to drive them out from before you?beware?lest you inquire about their gods, saying, “How did these nations serve their gods? And I will do likewise.” You shall not do so to the Lord, your God; for every abomination to the Lord which He hates, they did to their gods, for also their sons and their daughters they would burn in fire to their gods.
(Deuteronomy 12, 29-31)
God?s attitude toward the idea of human sacrifice is clear-cut: abomination and loathing. It is inconceivable. But we want to find out ? how does a person even come up with such a strange and terrible idea as sacrificing a human being? How does someone think, if even for a moment, that he should burn his child in fire?
The German philosopher, Georg Simmel (1858 ? 1918), in his book the Sociology of Religion, distinguished between ?religion? and ?religiosity?. Religion is an established framework of laws and norms in accordance to which a community of people behaves. Religiosity is a religious experience of yearning for the lofty, the transcendent; a sense of longing for something that is outside the realm of common phenomena. This religious experience is the emotional basis for conducting a relationship with God.
But religious experiences are not risk-free. They have the ability to become wild, explosive, warping thought and moral judgement. We do not have to look far to find examples of this. Even in the 21st century, there are those who slaughter innocent people in the name of God. This evil is based on unrestrained religious fervor, unconstrained by a system of God-given rules.
In order for such a religious experience not to lead to warped thoughts and morals, the Torah repeatedly emphasizes the foundations of morality and justice. Thus, after the amazing event at Mount Sinai when the entire nation experienced Divine Revelation, we find a collection of halachot dealing with proper relationships between people; thus, the supreme court was adjacent to the Temple in Jerusalem. The loftiest of religious experiences cannot be disconnected from the commandments and laws that substantiate it, and which also constrict it and stop it from spreading to immoral acts.
At the end of the book of Vayikra that deals with laws pertaining to sacrifices, the Torah sets up a warning sign in the form of ?Erchin?. If religious experience leads a person to the extreme idea of wanting to sacrifice to God a person precious to him, the Torah says he must not carry out such a horrendous act. Instead, he can donate money to the Temple; a sum that can express his religious experience but that will maintain the moral principles for which Judaism stands and protects tenaciously.