? Where Is Holiness Present
Rabbi Shmuel Rabinowitz, Rabbi of the Western Wall and Holy Sites
In this week?s Torah portion, Ki Tisa, we read about an upsetting event that happened at the beginning of the Jewish nation?s story: the sin of the golden calf.  Only forty days after the Revelation at Mount Sinai when the nation witnessed a public divine revelation, it was tempted to create a calf  and worship it as it had seen its Egyptian neighbors do for centuries. 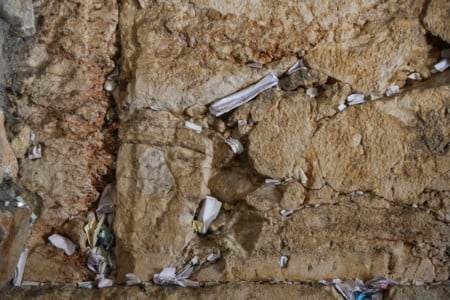 Moses was not with the nation during those forty days.  He ascended Mount Sinai where he had a long revelation with God, and then he was given the two Tablets of the Covenant on which the Ten Commandments were written.  Before he descended from the mountain, God told him of the sin committed by the nation in his absence.  After Moses prayed for the nation not to get punished, he came down from the mountain with the two tablets, saw the nation ecstatically dancing around the golden calf, and threw the tablets down, breaking them.
Breaking the tablets was no simple act.  They were not just any other object.  The Torah emphasizes that ?Now the tablets were God’s work, and the inscription was God’s inscription, engraved on the tablets.?  This is the holiest object given to Moses by God, and they ? these tablets ? were slated to be placed in the Holy of Holies, the internal and most sacred room in the Tabernacle.
If so, how could Moses break the tablets and seemingly desecrate them?  It is important to note that Moses did this of his own volition, not under God?s direction.  How could he take these God-given tablets and break them as though they were everyday objects?
We could also ask: If for some reason, Moses saw fit to break the tablets, why didn?t he do so when he was still on the mountain, when he found out about the sin of the golden calf? Why did he wait until he got down to the nation to break the tablets?
Rabbi Meir Simcha Hacohen of Dvinsk (commentator and rabbinical religious authority, Latvia, 1843 ? 1926) suggested a surprising explanation for Moses? behavior in his book ?Meshech Chochma?.  Holiness, he said, exists only with God.  Attributing holiness to any object borders on idol worship.  Even the Torah which is clearly sacred, is not sacred on its own but only because of the fact that God bequeathed it.  In and of itself, if we disconnect it from its divine source, it is not holy.
The sin of the golden calf touched upon this sensitive point: The nation that created the calf wanted a tangible object to which they could attribute holiness.  When Moses descended from the mountain, he understood that if he wouldn?t break the tablets, the nation would continue to believe this mistaken idea and would see the tablets as being holy of their own accord, just like the calf.  Therefore, he waited until he reached the nation, and then to their great amazement, he shattered the tablets and at the same time, shattered their mistaken idolatrous conception that attributes holiness to objects and to natural powers.  What Moses was conveying with this brazen act was that the tablets are not holy in and of themselves.  Their holiness stems from the Jewish nation receiving them and adopting the directions written on them.  If the nation would sin without understanding the infinite difference between God and objects, as precious as they would be, the tablets would have no value.
Moses did not break the tablets in a moment of unrestrained anger.   It was a thought-out act that was meant to educate the nation; to clarify Judaism?s opposition to the idolatrous conception.  Therefore, Moses was willing to do the unthinkable and break the tablets that God had given him.
Judaism?s war with idols is not over.  Classic idols are no longer common nowadays, but attributing holiness to objects is still rampant.  Breaking the tablets was meant to be a message for generations that will reverberate and direct our faith.