Redemption, Dependence, and Prayer
Rabbi Shmuel Rabinowitz, Rabbi of the Western Wall and Holy Sites
In this week?s parasha, Parashat Bo, we read about one of the most influential events in the history of humanity: The Exodus from Egypt.  The Jewish nation - enslaved doing hard labor in Egypt; whose infants were cruelly thrown into the Nile River; who was denied basic human rights ? was liberated.  No more slavery.  No more oppression.  From now on, the nation would make its way toward the Promised Land, the Land of Canaan, with awareness of the choice and role it is meant to fulfill: establishing in the Promised Land a ?kingdom of priests and a holy nation?. 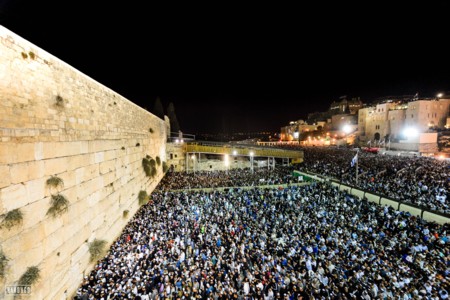 The Exodus from Egypt, that took place over three thousand years ago, was a fundamental event that left its impact on the daily life of every Jew.  Of the 613 commandments mentioned in the Torah, more than 50 of them were meant to preserve the national memory and nurture the personal connection of every Jew to that ancient story.  Every year, every week, and even every day, we encounter commandments whose declared purpose is: ?to commemorate the Exodus from Egypt?.
Furthermore, there is a special commandment to mention the Exodus from Egypt every morning and every evening; a commandment whose purpose is to ensure that no Jew forget for even one moment that thousands of years ago, God took his forefathers out of Egypt.
We must ask ourselves ? why is it that this event must be so emphasized in our lives?  What is so important about this story?  How is it relevant?  How is it supposed to influence our lives?
We can answer these questions by examining a statement made by Rabbi Yochanan, one of the great sages of the Land of Israel in the 3rd century:
Who inherits the world to come? The one who follows the Ge?ullah (redemption) immediately with the evening Tefillah (prayer)!
(Talmud Bavli, Tractate Brachot, page 4)
Rabbi Yochanan renewed a halacha (Jewish law) that the correct form of prayer ? when man stands before God and requests that He provide him with his needs and good things ? is when the man mentions ?redemption? before the prayer; meaning ? he reminds himself of the Exodus from Egypt and only then begins to pray.
And indeed, before the prayer of ?shmona esreh, amida?, we mention the Exodus.  But we must understand how this memory assists us in prayer.  What is lacking in prayer that does not first mention the Exodus?
As anyone who has ever opened a prayer book (siddur) knows, prayer is mostly requests to have our needs answered.  The amida prayer deals mostly with man?s needs: intelligence, health, sustenance, etc? Man?s basic relationship with God is one of dependence.  Every person with even a little life experience knows that success ? in every sphere of life ? is not to be taken for granted.  Man?s dependence on God is undeniably human-existential. With all due respect to the western concept of success, our fate is not in our hands.  Our control over our lives is at best partial in relation to all the vast possibilities that exist.
This dependence does not exist only among people of faith.  It is a basic fact: We cannot control what might happen and we are dependent.  The difference between a person of faith and someone without is just the question of who he feels dependent on.  A person of faith knows that he is dependent on God; a person who does not believe feels dependent on fate, luck, reality, and other terms whose common denominator is that they do not convey purpose or any other value.
Here is where the role of the Exodus from Egypt comes in.  In that same liberation from slavery to freedom, God was revealed as beneficent and concerned about weak and oppressed people.  In the most impressive performance described in the Torah, God appears and straightens things out.  Justice appears in the world tangibly and clearly: the slaves are liberated, the cruel enslavers are punished.
This memory changes the character of man?s existential dependence.  We are indeed dependent, but on whom? On He whose purpose is justice, on He whose goal is being good to every creature, on a God who once appeared and revealed to us what is usually hidden from view: there is justice in the world.  You are here, I am here, only so that things will be good.
Therefore, before prayer which is really only the expression of our complete dependence on God, we remind ourselves who God is.  Not blind fate, but a redeeming God.
This is how the Exodus from Egypt influenced human history, and how it continues to influence our lives and the world outlooks we form for ourselves.