Pray for the peace of Jerusalem. May all who love her prosper. 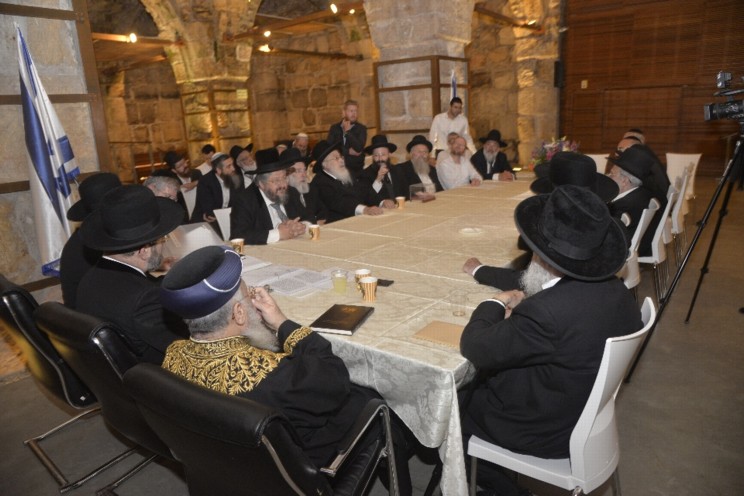 The Chief Rabbinical Council held a special and festive meeting at the Western Wall.
In honor of Jerusalem Day and the 50th anniversary of the liberation of the Old City, the Chief Rabbinical Council of Israel, led by Chief Rabbi David Lau, held a special and festive meeting in the Western Wall Tunnels.
During the council meeting, it reaffirmed that the Western Wall Plaza is a sacred site and acts as a place of prayer and that the customs of prayer at the site should not be changed.
The Rabbinical Council noted in its decision that lately there are those who question the inextricable link between Jerusalem and the Jewish nation.  We do not need any backing on the fact that the Land of Israel in general, and Jerusalem in particular, is the heart and soul of this nation.
The Council also discussed the prohibition on entering the Temple Mount and noted that chief rabbis throughout the generations have unequivocally determined that the sacredness of the Temple must be upheld, and all the great Jewish thinkers of the last generations have joined this opinion.
The Rabbinical Council reiterated that the chief rabbis of generations past determined that the sacredness of the Temple must be maintained.  We reaffirm this decision once again and pray that soon we will merit ascending the mountain with the Messian in holiness and purity.
The council backed Rabbi Shmuel Rabinowitz, Rabbi of the Western Wall and Holy Sites and all those who work at preserving and developing holy sites.
During the meeting, there was a moving ceremony in which the members of the council parted from Rabbi Yisrael Meir Lau who is retiring in the next few weeks from his position as chief rabbi of Tel Aviv  Jaffa and from his membership in the council after having served in it for decades.  The chief rabbis and council members thanked Rabbi Lau for his service of many years and for his great devotion to matters of the rabbinate.  They noted his impact on the world of the rabbinate during his years as Chief Rabbi of Israel and Rabbi of Tel Aviv-Jaffa and the Kiddush Hashem in his trips to Jewish communities around Israel and around the world.
Rabbi David Lau, Chief Rabbi of Israel and President of the Council said: Fifty years after we saw Gods miracles in a tangible way, there are those who have recently doubted the inseparable ties between Jerusalem and the Jewish nation No power in the world can disconnect our nation from its homeland.
The Rishon LeZion, Rabbi Yitzchak Yosef said: This is an opportunity to thank God for all the miracles and wonder that we merited at the Western Wall.  An important part of meeting here is the declaration that the Western Wall belongs to the Jewish nation.  As opposed to what was said by UNESCO, the Western Wall belongs to the Jewish people.