Avraham, Monotheism ? And What Next?
Rabbi Shmuel Rabinowitz, Rabbi of the Western Wall and Holy Sites

In this week?s parasha of Lech Lecha, we meet Avraham Avinu for the first time as he is chosen by God to be the first father of the Jewish nation, at the age of seventy-five. Why was he chosen? What do we actually know about Avraham Avinu? 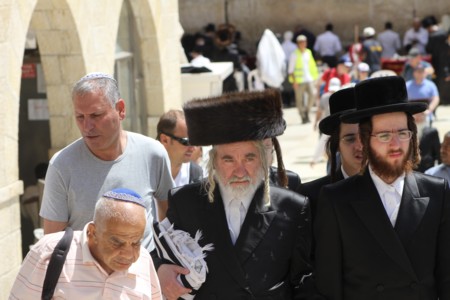 Jewish tradition tells us about a boy who gazed up at the sky, looked at the stars, and asked himself, ?Who made all this?? Later, he looked at people and asked himself, ?What is the right way to behave?? He saw people suffering and their pain touched his heart, so he asked ?Why?? He was a child searching for answers to every question.
But the environment in which Avraham was raised did not provide him with the answers he was looking for. He got answers full of myths about gods battling each other; he was told that many powers administered the world, and therefore, he should not search for justice anywhere. Avraham was not persuaded.
One day, he experienced enlightenment: There is one, all-capable God Who leads the entire world. He understood this essence, internalized it, and never abandoned it for a moment. He also taught it to his friends, which threatened the local rule. ?One day,? they feared, ?people will stop believing that the power of rule is divine?. This threat led them to throwing Avraham into a furnace. G-d saved him and he escaped with his family to another city, and there he was given a purpose:
“Go forth from your land?to the land that I will show you?And I will make you into a great nation?? (Breishit 12, 1-2)
Was Avraham the first monotheist? Apparently not. He was indeed considered the father of monotheism, but he was not the first. Our sages told of people who preceded Avraham who also believed in one god. Archeological research also proves the existence of faith in one god among the nations of the region. And yet, only Avraham merited being considered the founder of monotheism. Why is this? In what way was he unique?
Avraham took this one step further. He understood that only one God exists. And he understood that this one God has a clear path. He understood that if God has a specific path, this must hold some message for us humans. He understood that faith demands action, as the Torah describes:
??because he commands his sons and his household after him, that they should keep the way of the Lord to perform righteousness and justice? (Breishit 18, 19)
Avraham discovered the secret that made faith influential on the life of man. After years of searching, trial and error, he understood that faith which does not obligate proper behavior is empty. Faith obligates a human message, not tremendous monuments or glorious structures, but a message that can be passed on simply; something that can be done by hand, a word that can be spoken, a smile.
Avraham understood that man is a significant creature with the power to change the world. He believed in this and wherever he went, he called out in God?s name, taught and spread the message, with complete faith that every small human act carries great significance.
Avraham walked among idol worshipers and slowly gathered around him those who felt that idol worship was insufficient for their souls. He found people who agreed with the concept of monotheism. But he remained alone in his belief in the power of action.
One day, God promised, you will have a son. And from that son, an entire nation will come that will walk in your path. And Avraham?
And he believed in the Lord, and He accounted it to him as righteousness. (Breishit 15, 6)
And Avraham continued to believe?