A Different Kind of Theology

This week, we continue reading Moses’ final speeches, incredibly beautiful and lofty addresses meant to prepare the Jewish nation for entering, conquering, and then living in the Holy Land.

In the address asking the children of Israel to worship G-d and walk in His path, Moses says:

For the Lord, your G-d, is G-d of gods and the Lord of the lords, the great mighty and awesome G-d, Who will show no favor, nor will He take a bribe. He executes the judgment of the orphan and widow, and He loves the stranger, to give him bread and clothing.
(Deuteronomy 10, 17-18)

Moses describes G-d’s mightiness through the way He treats humans with justice, integrity, and compassion for the weak and oppressed.  His mightiness is particularly emphasized in that He does not “take a bribe” nor does He “show favor.” Sycophantic behavior of a human toward G-d will not affect the virtue of justice with which He judges the world, and a good deed will not suffice to make up for acts that are unsuitable in His eyes.

On the other hand, in Birkat Kohanim, the priestly blessing that took place in the Temple and nowadays takes place in the synagogue, the kohanim bless the nation as such:

May the Lord show favor toward you and grant you peace.
(Numbers 6, 26)

Seemingly, there is a contradiction in G-d’s behavior toward people.  On the one hand, He is described as not showing favor, but on the other hand, He commands the kohanim to bless the nation “May the Lord show favor toward you.”

Based on the sages on the Talmud, this question was raised to G-d by the angels:

The ministering angels said before the Holy One, Blessed be He: Master of the Universe, in Your Torah it is written: “The great, mighty and awesome G-d who favors no one and takes no bribe”, yet You, nevertheless, show favor to Israel, as it is written: “The Lord shall show favor to you and give you peace”. He replied to them: And how can I not show favor to Israel, as I wrote for them in the Torah: “And you shall eat and be satisfied, and bless the Lord your G-d”, meaning that there is no obligation to bless the Lord until one is satiated; yet they are exacting with themselves to recite Grace after Meals even if they have eaten as much as an olive or an egg.
(Tractate Berachot 20b)

The Talmud describes a conversation between the angels and G-d.  The angels claim a contradiction in G-d’s behavior.  How can he show favor to the Jewish nation? G-d responds with a surprising answer connected with a commandment we read about in this week’s parasha: Birkat Hamazon, Grace after Meals. The Torah commands that when the children of Israel enter the land, and eat of the goodness it has to offer, they should bless G-d for the good land.  The sages determined a text for this blessing which is recited after a meal in which we eat bread, known as Birkat Hamazon.  In the spirit of this blessing, the sages determined additional, shorter blessings before and after anything we eat or drink, as well as blessings of gratitude and praise for different times, situations, or places. The minimum amount of food necessitating Birkat Hamazon is eating to the point of satiation, as can be understood by the words, “And you will eat and be sated, and you shall bless the Lord, your G-d,” but the sages through the generations added that we should make a blessing even on the smallest amount of food, such as the size of an olive or an egg.

Here lies G-d’s answer to the angels: How can I not show favor to the Jewish nation?! I commanded them to make a blessing when they are sated, but they added to it and bless when they eat even the smallest of portions.

But we still need to understand: If the virtue of justice requires not showing favor, why is an exception made for the Jewish nation? And why is this strictness regarding Birkat Hamazon so significant that it leads to breaking all laws of justice?

Rabbi Abraham Isaac Hakohen Kook explained it this way: The basis of G-d’s just behavior toward humans stems from His desire to guide us to higher and proper behavior.  Therefore, there is no showing favor, since it is does not lead to people becoming more complete.  On the contrary, it shows that G-d seemingly turns a blind eye to inappropriate behavior.  But, there are people who recognize the goodness with which they are blessed, to the point of being filled with gratitude for every morsel of food they receive, even the smallest.  Those same people surely know that the best way to thank G-d for His grace is by fulfilling His desire that we be good people who are good to others.  When G-d shows favor to those people and looks away from certain failures, it would only encourage them to reach higher and more complete modes of behavior.

This equation between G-d and His creations exists in every relationship in our lives.  When we recognize goodness in our partners, friends, and family members, they too are more likely to look away from our failures, without fear that we will take negative advantage of them doing so.  This virtue of gratitude is therefore a strong basis for joy and serenity on our life’s journey. 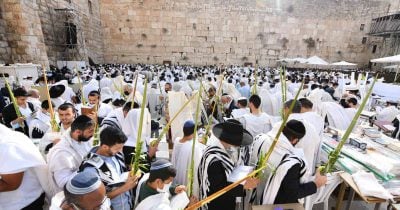 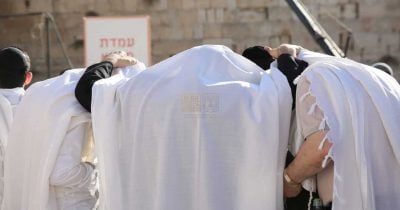