For the first time since the pandemic outbreak: Thousands of participants took part in the traditional Birkat Kohanim (Priestly Blessing) event

It’s hard to believe that only a year has passed since Passover of 2020.  Ever since Rabbi Gafner, of blessed memory, reestablished the traditional Priestly Blessing (Birkat Kohanim) fifty years ago, every year, hundreds of priests would ascend to the Western Wall and bless the tens of thousands of pilgrims who stood on the plaza as one person with one heart.  This transcendent and glorious event attracted tens of thousands, with the number growing from year to year, and it was one of the most exciting times at the Western Wall every year.  And then, last year, we faced an inconceivable reality of a deserted Jerusalem and a Western Wall Plaza devoid of worshippers.  It was obvious that the commandment to be very careful with one’s life took precedence over every other commandment in the entire Torah, but the heart… Our hearts cried at the site of the empty prayer plaza.

Those were days of extreme caution.  The nature of the virus was yet unknown and vaccines were a distant wish.  Synagogues everywhere were closed; Jews prayed the Passover prayers alone.  But we had the sacred responsibility of maintaining the only prayer minyan (quorum) in Israel, perhaps in the world, at the Western Wall Plaza, at the foot of the Temple Mount.  With great trepidation, ten kohanim (priests) gathered in the empty Western Wall Plaza, representatives of an entire nation, and blessed the Jewish people with the ancient blessing, “May the Lord bless you and watch over you; May the Lord make His countenance shine unto you, and be gracious to you; May G-d lift up His countenance unto you and grant you peace.”

Over a million people were with us, Jews from Israel and from all corners of the globe who participated in the prayer via social media.  Like our Forefather Abraham, about whom it was said that he “saw the place from afar,” they tore open the gates of heaven with their prayers, “Our Father, our King, withhold the plague from Your inheritance!”  There were only a few of us standing on the plaza, but we felt the entire Jewish nation standing there with us.

And now, only one year since those strange and different times, we are privileged to return to the traditional Birkat Kohanim (Priestly Blessing).  The event is taking place with strict adherence to Health Ministry regulations while making sure to safeguard the health and wellbeing of all who come to the Western Wall. But the ambience is one of a “Psalm of thanksgiving,” a hymn of praise and gratitude to the Almighty who blessed His nation with healing from the terrible plague whose end, G-d willing, is getting closer.

There are few moments in a person’s life when they witness history in the making.  Undoubtedly, this past year was such a time.  As the year ends, more than ever, I return to the ancient verses of the Priestly Blessing, heard today at the Western Wall Plaza by thousands of visitors as millions more tuned in from afar, and I derive both comfort and hope from them.  Because – what do we need more nowadays than the blessing and safekeeping of the Almighty? What are we missing nowadays more than the countenance and grace of the Lord? And what do we need more nowadays than peace among ourselves, peace with our neighbors, and peace with our world?

“Pure One who dwells in the habitation, raise up the congregation of the community, which whom can count.  Bring close, lead the plantings of the sapling, redeemed, to Zion in joy.

LeShana Haba’a BeYerushalayim – Next year, let us be in the built Jerusalem!” 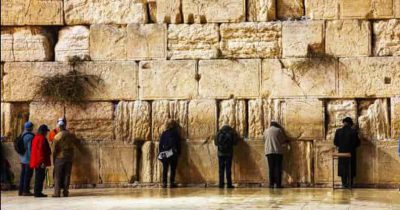 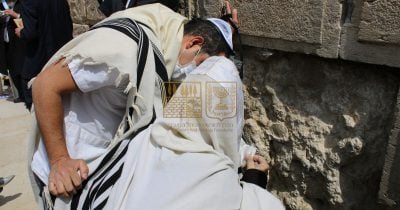 It was extraordinarily moving for us to accompany a father who lost his daughter,
Further details >
5 Nisan 5781
March 18, 2021 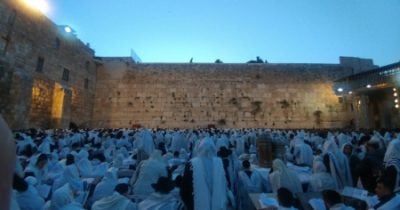