“When I arrived at the Kotel, I knew I succeeded and that now, everything would be good.”

Holocaust survivor Binyamin Wertzburger, who worked at the Kotel, passed away

“Damned Jews, you dream about Jerusalem? None of you will get there.  You will all die here,” promised the SS officer to Binyamin Wertzburger z”l in the Mauthausen concentration camp in 1944.  But it was this sentence that gave Binyamin the strength to face the challenges and survive the horrors of the Holocaust.  He saved the dream of reaching Jerusalem in his heart, and when he retired, instead of resting, he decided to move to Jerusalem and work at the Kotel as a custodian.

Binyamin Wertzburger passed away last Tuesday, a day after his 95th birthday, surrounded by his family and those who loved him.  He managed to recite Shema Yisrael before he returned his soul to the heavens.

Binyamin was born in a little town in Hungary in 1926. When Germany conquered Hungary in 1944, the 17-year-old Binyamin was taken, along with the area’s residents, on a march toward the Mauthausen concentration camp in Austria.  He said about this march that took many long weeks, “We marched days upon days and night after night, with almost no food or drink… The entire way, we were surrounded by bodies.”

In the spring of 1945, the camp was liberated and Binyamin was set free.  When he returned to his town, he discovered that he was the only survivor of his family and decided to make aliya to the Land of Israel.  But even when he arrived, the situation was not simple. Binyamin was recruited to fight in the War of Independence.  He got to Jerusalem for the first time in 1948, a few days before the British left the country. “The war was imminent, I decided I have to get to the Kotel no matter what,” he said. “At the Kotel, there were British and Arab soldiers guarding, but that didn’t scare me off, I wanted to keep my promise to that same damned Nazi officer.  I was young, alone, an orphan without family or friends, but I knew I had succeeded.  I reached the Western Wall.  The suffering and degradation were behind me.  From here on, everything would be good.”

At the Kotel, after fulfilling his promise, he decided to start thinking about his future. He married, settled in Afula, and worked there for many years.  After some changes happened in his workplace, he decided to finally fulfill his dream and settle in Jerusalem.  When Binyamin came to the Western Wall Heritage Foundation and asked to work there, he was initially and politely rejected.  The only available job was in cleaning, and due to his age, they were hesitant to let him work there.  “I told my story and asked them to give me a chance.  They said the only job they have to offer is as a custodian, but such work would not be suitable because of my advanced age.  I told them, ‘Try me, you have nothing to lose.’”

Binyamin took his work at the Kotel seriously.  He saw it as his mission.  Everyday, he came in his clean uniform and worked hard to “respect the holy site.”  His presence and story sparked interest with anyone who came to visit.  His story was a milestone in tours of the Western Wall Tunnels.  Binyamin met with delegations that came from around the world, sharing his personal story.  At his booth at the entrance to the Kotel, he made sure to have copies of the story by Shai Agnon about a pair of tefillin that he would distribute to bar mitzvah boys. He once said in amazement, “Where was I at their age, and where are they?”  He would be overwhelmed with excitement when soldiers in uniform would come to the Kotel.  Binyamin would stop them to give them his blessings.  He would take the notes sent to the Kotel every day and place them between the stones of the Kotel with reverence, acting as the emissary of the entire Jewish nation.

Even after he suffered a heart attack and could no longer come to work at the Kotel, Binyamin continued to come once a week to pray and meet people at the Kotel Plaza.  Binyamin chose to come on Tuesdays, because that is the day about which the Torah says “good” twice.

The rabbi of the Western Wall and holy sites, Rabbi Shmuel Rabinowitz, eulogized Binyamin and said, “Last night, we parted with tearing eyes and grateful hearts from our beloved Man of the Kotel, Binyamin Zeev Wertzburger zz”l. Binyamin, a survivor, lived through the horrors of the Holocaust and was privileged to move to Israel and raise a glorious family.  Binyamin showed up at the offices of the Western Wall Heritage Foundation with one request – to be a custodian at the Kotel.  To greet the pilgrims and to clean its stones.  He wore the custodian uniform every day with awesome reverence, like a Kohen dressing for work at the Temple, and with a pleasant smile on his face, he greeted each one of the millions of visitors to the Western Wall and the Western Wall Tunnels. He had a special fondness for the many bar/bat mitzvah children who would come to the Kotel. On Mondays and Thursdays, the days of Torah reading, he would wait for them with candies and a personal letter he wrote to them.

We saw Binyamin as an inseparable part of the Western Wall.  A stone of its stones.  Binyamin symbolized, in our eyes, the eternal connection between the Jewish nation and the ancient stones, and the Jewish chain of generations that survived the most horrible abyss.  Eleven months ago, we were privileged to celebrate his great grandson’s bar mitzvah at the Kotel.  Yesterday, we accompanied him on the last victory march of the person who faced death and prevailed.

Dear Binyamin, Man of the Kotel, a man of incomparable virtues, loved all of G-d’s creatures and nation.  You left us enveloped in countless merits. Merits of someone who turned his life into a mission of kiddush Hashem, sanctifying G-d’s name.  Merits of someone who became a symbol in his lifetime and whose shining image will remain with anyone who was privileged to meet him.  May the stones of Jerusalem be sweet for you.  Binyamin, clean the stones of celestial Jerusalem so they will speedily connect with Jerusalem here on earth.  May your soul be bound up in the bind of eternal life.”

Mordechai (Suli) Eliav, director of the Western Wall Heritage Foundation, who Binyamin met first before he began working at the Kotel shared, “For me, Binyamin epitomized the Jewish nation.  I was proud each time he met an official guest of the State of Israel and I was able to introduce this noble and pleasant person.  To meet a survivor who became a beacon that illuminated and warmed others, full of intertwined strength and humility.  Binyamin would stand facing the guest, stand tall, and tell his life story. In one such meeting, he told the man who was then the vice president of the United States, “I want to convey my gratitude through you to the American people who saved us from the horrors.  I came here, to the Land of Israel, and with G-d’s graces we built a glorious state and a wonderful family.”

We felt we were facing a person who, on the one hand, was sad, but on the other hand, had great satisfaction, joy, pride, and strength.  Thank you, Binyamin, for who you were to us.” 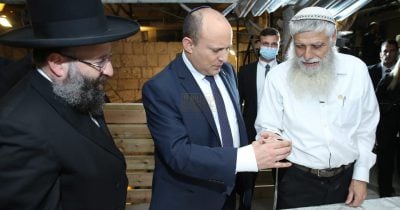